Before you PR for UnityStation, it would be helpful if you fully test your PR, read the contribution guidelines and read the Starting Contribution article on the wiki.

Below you can read our standardised multiplayer test-setup.

To test network interactions, you should set up a realistic environment. That means two instances: Client and Host (Server that's client, too).

You can run one instance from editor by pressing play button, but for another one you'll have to make a standalone build.

You can launch the game directly into the current scene, if it is a MainStation scene, that is open. 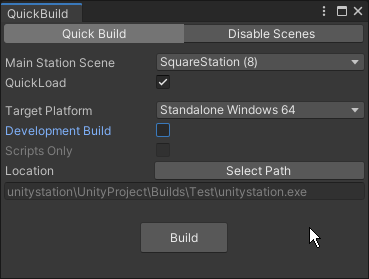 To make a proper standalone build, you should set up build settings (only once).

(If you don't see your current scene in the list, press Add Open Scenes button)

If you have Quick Load checked on GameManager prefab, you can uncheck all the asteroid and additional scenes, too.

First time you'll get a folder selection dialog where the build files will be stored. Create a separate folder outside of unitystation's project hierarchy. Then building will start, Unity will freeze until it's finished.

When it's ready a game window will pop up. Now you can enjoy smooth framerates and drag window around, also launch several instances if required (that doesn't work for OSX).

Next time you'll just have to press Ctrl+B/Cmd+B to Build And Run.

When you change stuff/recompile you'll need to rebuild to make Editor compatible with the Build.

To simulate network latency you need to select Network Manager in Hierarchy tab: Set up desirable ping (200 is recommended) and save (so that you don't lose that setting next time Unity crashes)!

Note that actual ping will be more than expected, 200 ping setting usually makes it 250-750

In general it's usually like this: Build And Run, then start up game in Editor when it finishes building. Doesn't matter much who should host and who should join, but keep in mind that Build performs better.

With above testing method you can find most issues related to your code, without spending too much time building. However, before a release or when a stricter test regime is warranted, for ex. when handling sync vars and clients joining, we have an advanced test-sequence: 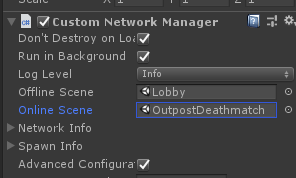 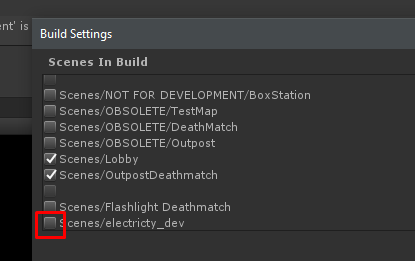 And then Build and Run + fire up game in editor